Once I had a taste of inkle weaving (although I remember at some point saying, I don’t really have time for this card weaving thing, even though it looks really fun and interesting, so we will just stick to regular old inkle weaving; if I want to get fancy I can do pick-up) I moved on to, as many weavers who try inkle weaving do, card weaving.  I wound up purchasing a used pack of cards picked up on Etsy, ‘just to try’.

Tablet (or card) weaving involves using cards/tablets (much like square playing cards) with holes where the warps (which run lengthwise in weaving projects) are strung through.  This link does a great job of explaining the basics.  Turning the cards to and fro acts like heddles on a regular floor loom, raising and lowering the warps and patterns are developed.  Historically, wooden or leather cards were used, or cards made from bone or other materials.  It’s possible to get cards in many materials.  Although it’s mostly used for bands, and is a very popular technique with re-enactment groups who lean towards Viking and Celtic times to embellish period costumes, I have seen tablet weaving examples around the ‘net which use hundreds and hundreds of cards in order to produce larger woven items.  It’s mind boggling to consider, but also intriguing.

Myself, however, although I tend to jump into things sometimes with more than two feet, I decided to stick with bands.  ;)

Another interesting thing to note about tablet weaving is that you really don’t need any kind of pre-built loom to make it work.  One can, like with a back-strap loom, tie the warps to something which will hold them taut, and tie the beginning end to a peg clamped to a table or even a belt around one’s waist, and you can be off and running.  You really just need to have cards (which can be pre-made or home-made) and some sort of yarn.

My first project was not anywhere near perfect (you can probably pick out where the pattern is off in the photo.  This happened when there were too many turns forwards or backwards).  I chose a pattern which was simple : load the cards and then it was 4 turns forward, 4 turns back, for the duration of the band.  Still, I like it.  At some point, it might wind up being a belt.

One of the reasons I wanted to try the cards initially was because I wanted to learn the pattern called Widderhorn (AKA Running Dog and Ram’s Horn and Kivrim) (the link will take you to a Pinterest search showing variations of this pattern).  Once I’d decided I liked tablet weaving enough to tie on another warp, I decided, what the heck, let’s try this Widderhorn.  Tablet-weaving techniques date back to the 8th century BCE ‘Iron Age‘ Europe and tablet-weaving purists will tell you Widderhorn is not a Celtic or Viking pattern (even though it’s used as such, in many cases), it’s from the 19th century, Anatolian.  This, although I am fascinated by the historical significance of tablet weaving, did not deter me from wanting to be able to try to produce this popular pattern.

One of the things one will encounter around the internet when it comes to card weaving is a diverse community with a lot of patterns available to try.  Another thing you will encounter are a variety of ways to load the cards.  And, yes, there are books out there which are more stringent in their presentation of how to face and  how to place the cards for starting and warping, but if one wants to veer into trying a pattern which is not in said book, it’s good to know a few things before choosing a pattern and tying a warp.  So it’s best to research each pattern you find, along with any accompanying information, before you tie on a warp.

For example, most of the patterns out there will have a 4-row ‘starting’ chart which shows which holes to put the warps through.  Cards are generally set up with ABCD holes in a clockwise direction.  I am finding (although I’m sure it’s not a written-in-stone theory) if the letters are noted from the top down ABCD, chances are the starting position will have the cards set up as ABCD facing right, and if the pattern has the rows noted as ABCD from the bottom, chances are the faced side of the cards will point left.  The trick is to determine which way the cards face (left or right) in order to have the pattern come out correctly once weaving happens and any pattern you encounter will either make this clear to you, or you may have to weed through other information about how to weave any particular patterns presented on any particular website.  And, once you know the facing position of the cards, one still needs to know the positions of ABCD in relation to the weaver before beginning to weave, as well.

Some weavers use other methods to determine the card positions (like marked corners or which threads are up/down at a particular moment in weaving) but I am not remotely in the realm of actually recognizing such things while I’m working (yet) so I rely on the positions of the letters being properly posed and set-up and strung.

I wound up using this pattern (below) as a starting point which specifically tells the weaver to start the cards with D & C holes closest to the weaver with D at the top which will have the cards facing right.  This website, from Norway, has a plethora of tablet weaving information and patterns to try. 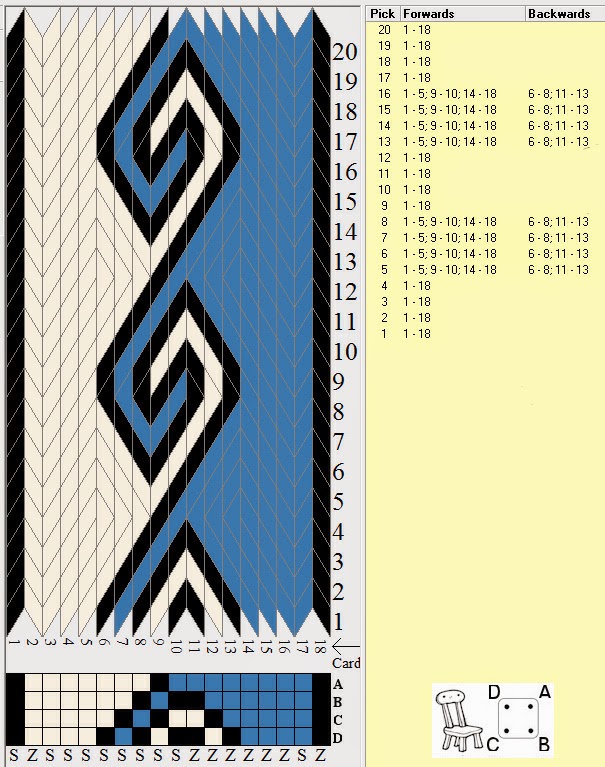 I use my inkle loom for card-weaving.  I don’t run the warps over the first top rung as for inkle-weaving but instead tie the warps from the beginning lower rung  over the second top rung at the back of the loom and then around the bottom.  This provides for a nice long area to manipulate the cards as needed.  If I want a longer warp, I zigzag through the other inkle rungs between start and finish but, in this case, I just tied around once.  This builds a continuous warp (vs warps stretched lengthwise and not tied together in a circle, but it’s still easy enough to untie any warps which might be mis-strung and reposition them, or to add/remove warps if required in a case of stringing the wrong colour.

Some folks warp one card at a time, tying on the warps as they are threaded.  I like to cut a ‘dummy’ warp which I use for a measuring warp and I generally cut four warps at a time in their respective desired colours and string them, and tie them on in groups of four as well.  When you are tying on, you do not have the cards turned in any ABCD position.  What you are watching for is to be sure the right colours are threaded and whether you have correctly strung the cards to be S or Z.

Once all the cards are tied into position on the loom, then they are turned to the correct starting position.

So, here we are, all strung up and ready to go :

This pattern, as you will see in the pattern instructions above, asks for all cards to be turned four turns forwards for rows 1 2 3 4.  For the next four rows, you have two options – the ‘forward’ cards remain as they are, ready to turn forwards.  But for the ‘backwards’ cards (in the pattern, cards 6 7 8 and 11 12 13 – in my pack it will be cards 3 4 5 and 8 9 10), the options are to split them from the main group and physically turn them backwards while turning the forwards cards forward for each ‘turn’ in the pattern (the next four rows) or to ‘flip them’ from facing right to left along a vertical ‘axis’, sometimes called ‘twisting’.  I choose to split the backwards cards from the main pack and turn them backwards, because I have small hands so flipping the cards is not the most comfortable thing for me to achieve, and my cards are on the larger side so it means dragging all the warps farther apart to achieve a flip and I think it’s probably, with the largeness of my cards, a bit hard on the warps.  So I just split the backwards cards from the main pack and turn them towards me while turning the others forwards.

In the pattern illustration above, you will note where the ‘backwards’ cards turn opposite of the forwards cards, there is a ‘v’ formed, which makes the ‘horn’ for which the pattern is named.  Although the above pattern lists 20 rows, it’s really only an 8-row sequence.

And here we are, off and running (no pun intended to the Running Dog) :

I have no clue what I will do with my pretty finished band once it’s off the loom.  But, sometimes, it’s just nice to make pretty things.  If it’s meant to be ‘something’ someday, I will let you know.  :)

Photos © Lori Law and/or noted.  Video by Tudela1975b on Youtube.